The DFW 9-Ball Tour has grown so quickly and dynamically in the past four years that it is time to adopt the data-driven approach to assigning handicaps that is destined to be the universal standard in pool, FargoRate. Using FargoRate will allow for unbiased rankings, based on ability - which the players have requested.

The DFW 9-Ball Tour proudly welcomes FargoRate as a sponsor!

The DFW 9-Ball Tour has talked extensively with Mike Page of FargoRate and together we provide the below information to help describe and/or clarify some things:

Most players already have an established Fargo Rating and will play at the same handicap as before.

Some of the benefits of this new approach are

Fargo Ratings--based on performance against opponents of known rating--become more reliable when they are based on more games.   Robustness is the number of games that contribute to a player’s rating, and all ratings based on 200 or more games are referred to as established.

New players who have no games in FargoRate will be assigned a DFW 9-Ball Tour handicap based upon known ability just like before. "Known ability" is determined by research on tournaments, the input of fellow players, and asking trusted Tournament Directors and League Operators (the same as was done in the past).  Then that handicap assignment will establish a Fargo Starter Rating for the player shown as a red line in the graph.   For instance, a new player assigned a 7 handicap will get a Starter Rating of 600.

Fargo Ratings will be updated after every DFW 9-Ball Tour event.  CHANGE:  Any changed handicaps will be adjusted right before each stop.

Please see the videos at www.fargorate.com as well as the FAQ section.  You may look up a player’s rating at fairmatch.fargorate.com. 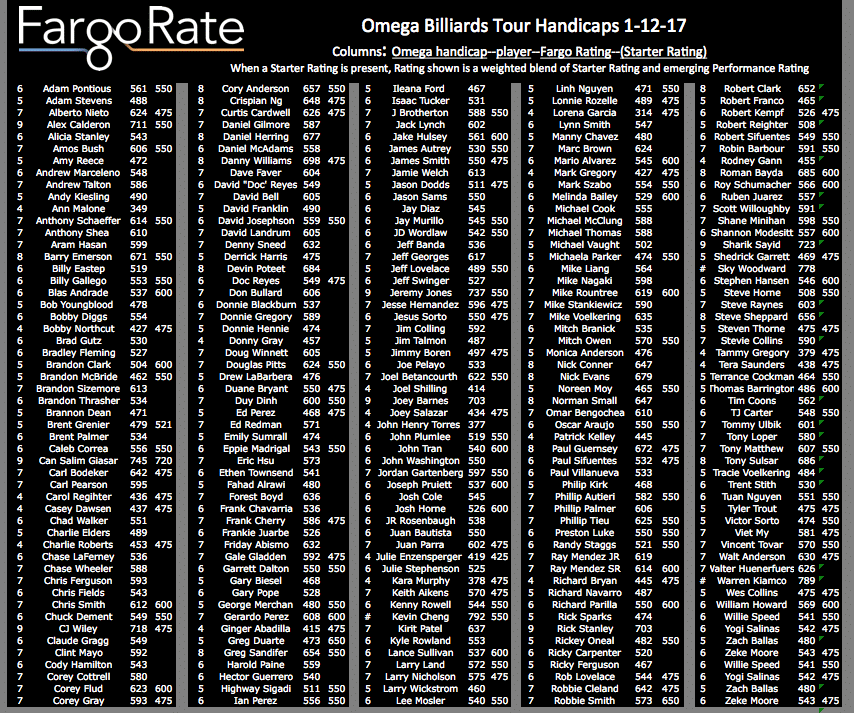 You may be aware that CSI assigned starter ratings for many unestablished players (robustness under 200) according to the previous national classifications Open, Advanced, Master, etc.   Starter Ratings are a mechanism to incorporate known ability for unestablished players as discussed above.  Starter Ratings and Fargo Ratings are two different sets of numbers.  Starter ratings are NOT an indication of a handicap rating, only a starting point if there is no data at all.  Reliable local knowledge, where it exists, is better than the crude national classifications, and for this reason CSI and FargoRate are working in many states to incorporate that local knowledge just as is being done here with Omega Billiard Tour players.   As always, when more data exists, the data takes over.  Starter ratings are a way to inject historical knowledge/local knowledge/known ability for players with no Fargo Rating or an unestablished Fargo Rating.   In fact these can be and will be modified using local knowledge whenever that knowledge is reliably available.  League operators and tournament directors will have some leeway in assigning and modifying starter ratings.   In fact, FargoRate just modified thousands of starter ratings for players in the pacific northwest to reflect local knowledge.  So assigning starter rating based on our former Omega handicaps is consistent with what they are doing elsewhere and what they hope to do in many more places.

If Melinda played Monica Anderson, she'd be expected to win 6 to her 4. It doesn't care that Melinda is a 6 handicap and Monica is a 5 handicap. If Monica won a match against Melinda in a Omega event with a score of 5-5, she would go up a bit and Melinda would go down a bit.  This is not because Monica won the handicapped match; it is because she would have been playing even with Melinda for 10 games when due to her lower rating she is not expected to.

I'm confused by why Tony Sulsar isn't a 9. He keeps winning! Why doesn't his Fargo move up?

Tony is a high 8, so he no doubt is going to look in some ways like 9 material.

If we look at Tony's record against other high 8s (i.e., against his peers 670 & up) We see that against Barry Emerson, Daniel Herring, Devin Poteet, and Paul Guernsey, Tony has a combined record of 61 wins and 61 losses--exactly what we would expect.

Against 9s, (Jeremy Jones, Joey Barnes, and Can Salim Giasar), Tony has a record of 34 wins and 39 losses--again more or less what we'd expect for a high 8.

He has a firm rating based on lots of games in and out of the Omega Tour.

The short answer is his Starter Rating (SR) was at 525 when it was supposed to be 550. But for the sake off others who might be interested, I'll explain what it means. He has 135 games in the system playing at a 588 speed. You guys don't see that 588; only we do. If he continues with another 65 or more games playing at the same speed, he would have a Fargo Rating of 588. But because he has fewer than 200 games, there is still influence of a SR, and that SR carries the "weight" of 65 games. If the SR is at 550 (the 6-speed equivalent), then the rating you see is 576. That is the case now. If the SR was at 600 (the 7-speed equivalent), the rating you see would be 592. Either way, He would play as a 7. And soon the influence of any SR will go away completely.

How can my Fargo move when my robustness (number of games) doesn't change?

A player's Fargo can change based on his past opponents.  For instance, if some of your opponents played a whole new bunch of games, now the system has a better idea of how they play, and FargoRate interprets that player more accurately and so your past opponents rating may change which would then affect/change your FargoRate as well.

Since the matches with ball spots don't count, doesn't that adversly affect our ratings because not all matches are used?

Mike Page stated again (I've asked this several times) that games with balls spots that don't count in the system doesn't really affect your FargoRate.  It may slow the stats (a rating) from going up or down a little, but that is all.   Players who have a lot of games, it doesn't affect them hardly because of all the other data already in the system.

We use cookies to offer you a better browsing experience, analyze site traffic, personalize content, and serve targeted advertisements. Read about how we use cookies and how you can control them by clicking "Privacy Preferences". If you continue to use this site, you consent to our use of cookies.